Get fresh music recommendations delivered to your inbox every Friday.

from Empathy for the Evil by Mecca Normal 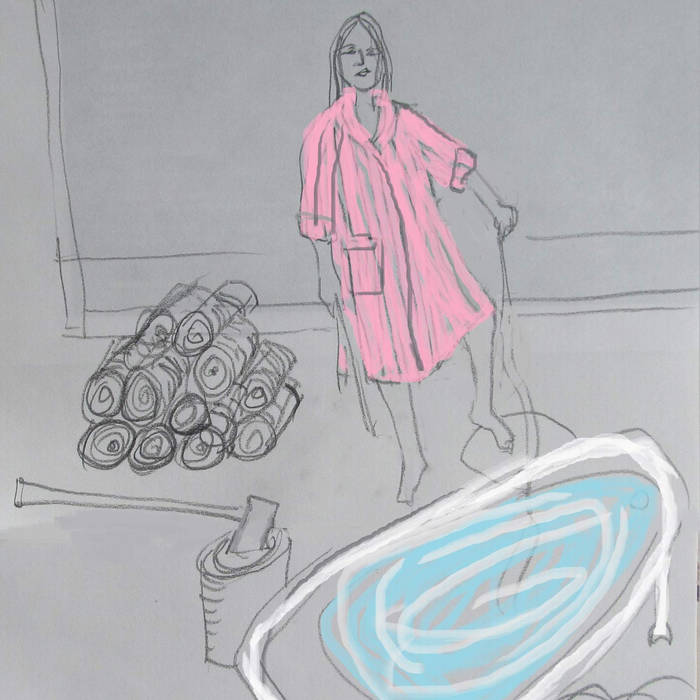 Lyrics are from "The Black Dot Museum of Political Art" a novel by Jean Smith..

Their cast iron clawfoot tub was raised up on bricks to make room for the fire beneath it. After supper, the bath regime began with Odele’s father climbing in first to soak for the better part of an hour, after which, when her mother was alive, she’d be next, but she tended to make it quick. After her – the boys, one at a time. Finally it was Odele’s turn. Frequently she had to chop more kindling to stoke the fire and wait until the water warmed up again. She pulled the sash of her pink chenille bathrobe tighter and swung the axe more accurately than either of her brothers, splitting wood like she was slicing bread. Truly alone, she sat on her thinking rock, poking embers, vowing that one day she’d take baths twice as long as her father’s and soak in bubbles until the cows came home. When she had a child she’d spoil it. It could eat cake all day long for all she cared. Odele shifted the wood with a twisted iron rod so familiar in her right hand that it was invisible to her. All week it hung beside the leather strap in the shed, next to the soap, until bath night when, individually they held it like a mediaeval weapon, jabbing it into the heart of the fire as heat flushed their faces and alone, they allowed themselves to imagine episodes of liberation – and even retribution – as they prepared to bathe their scrawny hillbilly bodies in murky water beside an unnamed stone on which sat the soap. Unnamed by everyone except Odele. It was her thinking rock, although she’d never said it out loud to anyone except herself. It was here that the term 'run through with an awl' played over and over in her head and she blamed the rock for making her think it. This was what happened when she sat on the thinking rock. It made her think awful things about her father. She blamed the rock for putting things into her head and she thought it best to say them, to let them out, rather than save them, in her head, fearing that she might blurt out 'run through with an awl' instead of please pass the potatoes at dinner.

Odele kept her small bottle of bubble bath in the pocket of her chenille robe. As she dribbled it across the dirty water she repeated her mantra, 'run through with an awl'. Naked, one foot on her thinking rock, she used the soot-blackened poker to agitate the water, to make bubbles, and she laughed at how she must look, the real Odele, and she added to her chant – if all eyes were on me now.

The saving grace of her otherwise woefully lacking existence was that her father was not a man of god. Unlike her schoolmates traipsing off to church, Sundays were her own. Not to run through fields of buttercups, but to catch up on chores. Odele sometimes found herself glancing skyward while she squeezed dirty water out of a mop, thanking god that her father was not religious, thus cracking herself up enough that she twigged onto how humour worked – it split apart the dark tendrils tightening in her gut and around her heart, soothing her like a slug of moonshine, but laughter didn’t burn and make her cough. Odele tried to find external sources to make herself laugh, to reduce the internal grumbling in what she knew was not her soul – nor was she hungry, unless what she felt could be called a hunger to express herself. If she laughed or cried her father got angry. He was a man who was staunchly confused about most things, but in his role as head of the household, he felt compelled to have strong opinions. Anger was the only emotion he let his family see. He pontificated wildly, combining nuances of opposing stances, putting on a show. All bluster. Odele tried to follow his logic, but when she was nine she heard the word irrational uttered by her mother while they were going through the remnant bin at Hester’s Dry Good Store.

By the time she left the farm at sixteen Odele had eaten enough green beans to last her a lifetime. Emancipation from what she regarded as emotional tyranny came by way of the SMT Eastern bus line and her overwhelming determination to never again eat anything green.

from Empathy for the Evil, released September 16, 2014
Produced by KRAMER. Mixed and mastered by KRAMER at Noise Miami. Recorded by Rat Bastard at the Laundry Room, Miami Beach in November of 2012. Art by Jean Smith.

Bandcamp Daily  your guide to the world of Bandcamp